I have so many questions about Minimum wage it makes my mind spin every time I discuss it with anyone. It’s a challenging question. Why is going up? Why does it need to go up? WHen is it going to go up again? It would be great if we could consider it an important scientific endeavor and important to our development as a species not just a country.

We need a way to trade the value of what we do, but how much do we pay for people to do things that are easy to do? Or don’t require the training of other professions? Let’s just consider the doctor and the bus boy, two jobs that require different training levels and education.

Who deserves to be payed more? The doctor gets a good job where he helps people everyday, and the opportunity for education his entire life. The bus boy has to work weird hours, pick up garbage, and clean dishes. In some sense he has the tougher job, the doctor would never do a bus boys work. You’d have to pay him more than the bus boy is willing to be payed. Of course that doctor had to go to school for many more years and spend time in residency. It wasn’t easy, but it wasn’t as difficult as it might seem. They were surrounded by friends and family most of the time, and were assisted by colleagues, teachers, and financial assistance/loans. It definitely takes a special person to be a doctor, it also takes a special amount of environmental conditions. Such as all the support groups.

In Washington, more specifically Seattle, $15 dollars an hour is being considered for the new minimum wage. That seems a bit high to me, but I really don’t know… If it doesn’t become $15 on this ballot its just a matter of time before it becomes $15 dollars on the next ballot, and that the minimum wage will continue to increase because of factors such as inflation and the creation of objects of value (Manufacturing, mining,etc). If this is the case why do we wait so long to adjust the number, it originally started at $1 an hour and now we’re considering $15… According to the trend it will shortly after be $20 than $40 than whatever inflation + value creation deems reasonable.

So why not increase the minimum wage on a linear path, so that we don’t let people suffer, but still provide business opportunities to intelligently invest an employees without worrying about going under?

There are so many variables and issues to be considered, I wish I could run clear experiments to determine the best result… I love arguing with my grandfather about it, but it would be awesome if we were on the same page according to evidence instead of speculative reasoning about the willingness of people to self motivate/educate and work to make our world better for everyone. Ahhhh it’s crazy, I would love to spend more time learning about wage control.

Construction Site in Seattle: So many linear lines! 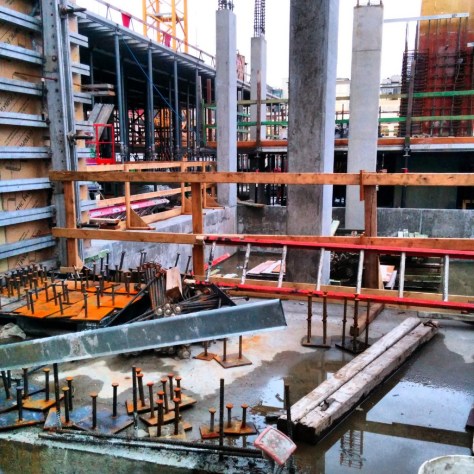